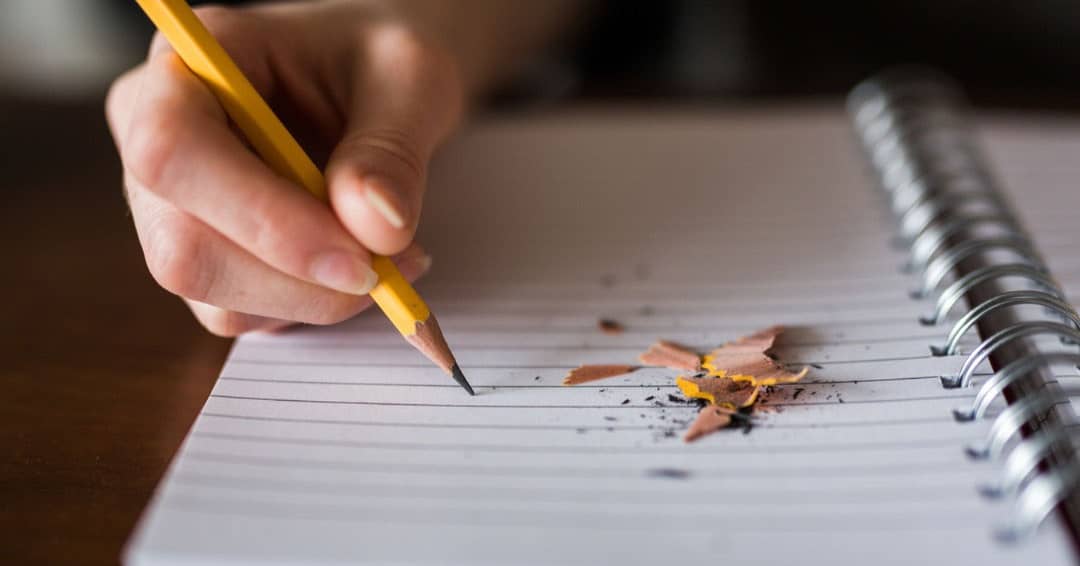 A bad or bland college application essay can greatly harm your chances of getting into competitive colleges. On the other hand, a compelling and engaging essay can help admission officers understand the full picture of who you are and why you will be a great addition to their student body.

That’s why we’re going to share the most common problem students face when writing their common application essays and the simple solution to fixing it.

Problem: Students Don’t Know How to Tell Their Story

Why do so many students find college application essays difficult to write?

However, during high school, the focus switches to analysis and expository writing. You write analytical papers on the themes of “The Grapes of Wrath,” research papers on why empires fail, and lab reports on centripetal acceleration.

However, if you check out the 2020-2021 Common Application essay prompts here, you’ll see writing about yourself is exactly what is required.

The application essay is the college’s way of getting to know the applicant behind the GPA, test scores, and resume. It is the student’s opportunity to show a side of them that is not readily visible in the rest of the application, and to show that they are someone who colleges would want as a part of their student body.

But many students end up turning in lackluster – or even just bad – essays because they don’t know how to tell their story.

Since rising seniors are so out of practice with narrative writing, they need to start writing early.

It’s that simple. If you begin writing early, you will give yourself time to find your voice.

And believe us, it takes some time.

To show you what we mean, here are two examples of real MEK students who completed our Roadmap to College Program.

Student A was an excellent student with a near perfect GPA (3.964 unweighted) and perfect ACT and SAT Subject Test scores. She attended a STEM magnet school, where she studied engineering at the top of her class, and outside of school, she was an award-winning flautist. Her activities included traveling far and wide to play at national and international flute competitions, interning at a hospital, and studying advanced topics at special university programs.

No one would expect that a student so highly decorated in both music and engineering would have so much difficulty with writing her application essays.

Her MEK Review essay coach worked with her starting in August before her senior year. Essay after essay, it was evident that Student A had a hard time putting her personality into her writing. She just did not know how to talk about herself. Therefore, her writing only captured a surface-level image of herself. It came off boring and bland.

Student A worked tirelessly with her essay coach at improving her writing. With regular essay meetings and frequent progress check meetings with the MEK Academic Counseling team, Student A slowly started to open up. Instead of writing about what was already on her extensive resume, she started to write about herself. After writing a total of 18 essays for applications to 6 different schools, she reached a breakthrough.

Her essays were not only beautifully written, but also engaging and, when appropriate, even humorous. Because of all her work with her essay coach, she was able to eloquently articulate her background and passions.

Student B was an average student with a much lower GPA (3.2 unweighted) than Student A. He attended a private day school, and did not participate in many extracurricular activities. He was not the most motivated student. Initially, he was not even sure if he wanted to attend college. He did not have any particular academic interests and was most interested in earning money at his part time job.

When Student B started with his essay coach in August, the MEK Academic Counseling team expected that he would not be very responsive, and that it would take many essays and essay meetings for him to improve.

Student B wrote draft after draft for his Common Application essay and supplemental essays. Yet each draft continued to show limited vocabulary, an unclear message, and an only surface-level image of himself.

Six Common Application essay drafts and eight supplemental essay drafts later, Student B found his voice. His breakthrough was not as dramatic as Student A’s. Nevertheless, his improvement changed the caliber of his application drastically. His vocabulary became more diverse, and while he still needed guidance in choosing topics and making his points, as he saw his own writing improve, he became more motivated. He more diligently prepared for essay meetings and worked harder at completing his essays.

However, Student B is also a student who would have greatly benefited from starting writing early. He would have had the practice that he needed to confidently and creatively express his thoughts, and his overall college application process would have been less stressful.

This program gives high school students a head start in practicing their narrative writing skills, while also getting more comfortable about opening themselves up in their essays. With this program, students like Student A–high-achieving students with little to no narrative writing experience–and Student B–less motivated students who do not know how to talk about themselves– learn the necessary skills to craft meaningful and well-written college application essays.

With a carefully formulated writing curriculum that is modeled after real college essay prompts, students are able to complete the program with well-crafted essays with the potential to use in their college applications. IWP is designed so students can make a smooth transition to the Road Map to College program.

For more information, feel free to call 855-346-1410 or email acs@mekreview.com to schedule your first consultation.

We can’t wait to help!

Jaehee Ahn is MEK Review's Director of Academic Counseling Services and a graduate of the University of California, Berkeley. She is also an alumnus of MEK Review's SAT Prep program. If you have any questions about our College Counseling programs or wish to set up a consultation, you can email Jaehee at acs@mekreview.com.